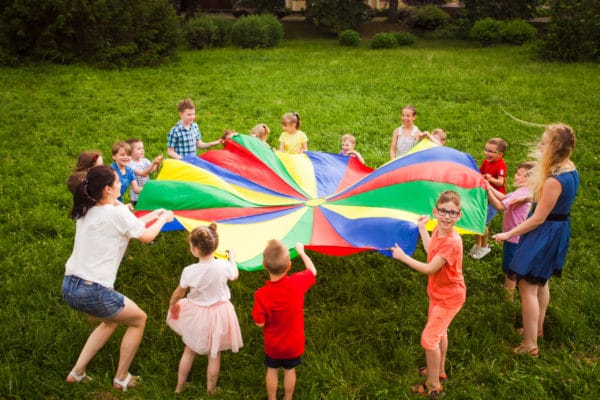 Parachute games develop many different skills in pre-schoolers. They are one of the best group activities you can try, great for team-building, cooperation, and all sorts of physical skills.

If you combine these parachute games with music and songs, then you have a perfect formula – a great way of stimulating listening, attention and interest in many different areas of the curriculum.

What are some of the best parachute songs for pre-schoolers?

The short answer is:

To find out the lyrics for these songs, how to use the parachute to sing them, and some top tips for getting the best out of them, then read on!

This article is one in my series of parachute blogs that includes:

This is probably the most exciting counting backwards song!

How to play it – Basically, what you do is all hold the parachute and beat gently up and down to the music, whilst you sing:

We’re going to the moon!

We’ll be there very soon

(If you’re not sure of the tune, then maybe check it out on youtube)

Then you all shake the parachute for each number as you go:

When you get to zero, everyone crouches down. Then all shout ‘blast off’ together, stand quickly up and throw the parachute upwards and let go. If you all let go at the same time the parachute will billow up into the air and might even stick to the ceiling.

If you want to check out some other fantastic maths games using parachutes, then have a look at 14 Fantastic Parachute Maths Games.

This is a fun number recognition song.

How to play it – Put some numbers down on the floor around the outside of the parachute. The children hold the parachute and walk around in a circle, singing (to the tune of Twinkle Twinkle)…

Walk around the chute all day

Which number will I say?

When you get to the end of the song you freeze and say the number that you are nearest.

Top tip – you can say the number in a different voice, such as a T-Rex voice, or like a ghost.

3.Farmers In His Den

This is a classic circle game, and great for playing with a parachute.

How to play – Everyone sits around the parachute, holding it. One child is nominated as the ‘farmer’. They go and stand on the parachute.

Everyone shakes the chute to the beat and sings:

The farmer’s in the den,

Then choose another child to join the farmer and hold hands and everyone sings:

The farmer wants a wife

The farmer wants a wife
E-i-addio

The farmer wants a wife

One by one other children join them as you sing:

The wife wants a child…

The child wants a nurse…

The nurse wants a cow…

The cow wants a dog…

The dog wants a cat…

The cat wants a mouse…

The mouse wants some cheese.

Music and parachutes go hand in hand brilliantly. If you are interested in other parachute music games, then why not have a look at 11 Wonderful Music Parachute Games.

4.Here We Go Round The Mulberry Bush

Another classic circle song is brilliant as a parachute game.

How to play it – Very simply, all walk or skip round the circle singing:

Here we go round the mulberry bush

Here we go round the mulberry bush

On a cold and frosty morning.

Then do different actions as you sing…

This is the way we shake the sheets

Shake the sheets…etc (Shake the parachute)

This is the way we hammer nails…(Go up and down)

5.5 Cheeky Monkeys Jumping On The Bed

It is good if you have some kind of props for this. If you have five toy monkeys then amazing!

Otherwise you could use something like beanbags to be the five monkeys. This is one of the all-time classic counting songs.

How to play – Put the five ‘monkeys’ on the parachute. Everyone cooperates to bounce them up and down as you sing:

One fell off and bumped his head

‘No more monkeys jumping on the bed!’

Take one monkey off the chute and count how many there are.

Continue until all the monkeys are off.

This game is fantastic for practising 1 to 1 correspondence, and also rote counting. To find out more about rote counting check out my essential guide.

Top tip – Use lots of mathematical language like ‘one less than’, and ‘fewer’. Exposure to these words through counting songs really helps the children to get to grips with these concepts.

This is more of a chant than a song, but you could definitely think up a tune if you like!

How to play it – Everyone holds the parachute and chants:

Repeat a couple of times.

Other verses you can do include:

This is a great game for early phonics, and linking words to actions. If you are interested in other early phonics parachute games, then take a look at 10 Brilliant Parachute Phonics Games.

7.If You’re Happy And You Know

Everyone knows and loves the Happy And You Know It song, and this parachute game uses this song and tune, but just tinkers around with the lyrics a bit.

How to play – Stand round the parachute holding it, and sing the following:

If you’re happy and you know it

And you really want to show it

There are all sorts of verses you could do for this, so be creative! Some other ideas include:

…go round and round

This is an action song that is just crying out to be turned into a parachute game.

How to play – You sing the song and carry out the actions:

Oh, the grand old Duke of York
He had ten thousand men
He marched them up to the top of the hill (Lift the parachute up)
And he marched them down again (Bring it low down)

This one is similar to the Grand Old Duke of York in that the lyrics are really movement based and there is lots of going up and down in the song.

How to play – Same again you sing the song and bring it life with movement of the parachute:

Incy wincy spider climbed up the water spout (Go up)

Down came the rain and washed the spider out (Go down)
Out came the sun and dried up all the rain (Walk round in a circle)
Now Incy Wincy spider went up the spout again! (Go back up and finish high)

All children love this song!

How to play – The parachute becomes like the oars of the boat in this one. It is best played sat down. The adult will need to orchestrate the to and fro motion of the parachute as one side pull and the other moves forward, and then vice versa.

Row, row, row your boat
Gently up the creek

If you see a little mouse
Don’t forget to squeak! (Do lots of squeaking!)

Row, row, row your boat
Gently down the stream

If you see a crocodile
Don’t forget to scream! (Scream!)

Row, row, row your boat
Gently to the shore
If you see a lion
Don’t forget to roar! (Roar!)

Top tip – If you have any kind of puppet or toy that can go with this (e.g. a mouse or a lion), then great! This will bring it to life even more.

Waves and parachutes go brilliantly together, and children really enjoy creating waves. It is really multisensory, as they experience the air rushing off the chute and also the billowing noise that it makes.

How to play – Make waves in different ways as you sing:

The Waves on the Sea go up and down

The waves on the sea go up and down

The waves on the sea go splish, splash, splosh

The waves on the sea go splish, splash, splosh

The waves on the sea are very small…

The waves on the sea are very big…

This game is adapted from the song The Farmer’s In His Den.

How to play – Put some shapes under the parachute, e.g. a triangle, square and circle. Pick one child to go first.

Then all shake the chute to the beat as you sing (to the tune of The Farmer’s In His Den):

What Shape is it today?

What shape is it today?

What shape is it today?

The nominated child dives under and grabs the shape and brings it out.

Then pick another child and repeat the game.

Top tip – This can be played with numbers under the parachute and just a slight change to the lyrics. You could also use 3D shapes.

This is another all-time classic counting song.

How to play – If you have five plastic or rubber ducks, then that’s great. Put them on the parachute. Alternatively, you can use something to be the ducks, such as sponge balls.

Then you all sing the song, whilst gently rippling the parachute (like water on the pong):

Take one off, and continue…

Top tip – Pause in the last line when you all say ‘And only….’ This gives a bit of thinking time for the children to work out how many ducks there will be.

A nice simple one to finish. This classic song has lots of going up and down, which is always great for a parachute game.

How to play – Walk round in a circle with the parachute, and sing the following with actions:

Ring a ring o’ roses
A pocketful of posies
a-tishoo, a-tishoo
We all fall down. (All fall down)

Fish are in the sea

We all jump up

With a one, two, three! (Grab the parachute and jump back up)

Good luck with these parachute games! There really are a multitude of skills going on throughout all of these, and they are activities that hopefully children will ask for again and again.

If you have found this article useful, then why not check out one of these articles: