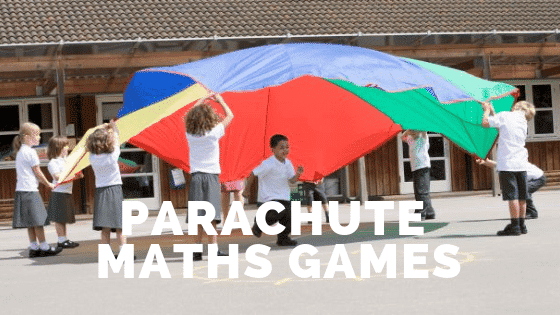 Parachute games are one of the best ways for young children to learn a range of skills across the whole curriculum.

They strengthen their hands by gripping, and they improve their coordination by the movements involved in the games. They develop their listening and attention, and learn to cooperate with others in a fun context.

But have you ever thought how you can develop maths through parachute games?

There are many types of parachute maths games. You can try singing simple counting songs, and then bringing them to life with parachute actions and movements. You can play games involving counting. You can play many games that develop number recognition, such as swapping number partners under the parachute. Knowledge of shapes and time can also be developed through parachute.

Read on to find out my 14 personal favourite games…

This is a great way to teach counting back, as well as being an excellent cooperation game. Get the children to stand in a circle, holding the parachute in the air. Then I get them to sing a counting back song first. Probably the best know is the Zoom Zoom Zoom song:

We’re going to the moon.

We’ll be there very soon.

When they’ve sung that, we all then lift the parachute quickly up and down, and count back from ten with every lift. 10, 9, 8, 7…

When you get to zero then you shout ‘Blast off!’ This is the tricky bit. All the children will throw the parachute up into the air and try to all let go at the same time.

This is hard to achieve!

This is a game of focus and steady hands! Have some number tiles 0-10 and lay them on different parts of the parachute. Then get the children to gently hold the parachute up in the air at their waist height.

Then put a ball onto the parachute and say a number, e.g. 8. The children must gently try to guide the ball towards that number, and get it to touch the number. If it rolls onto number 8, then shout another number and repeat.

This is a brilliant game for number recognition. To find out my favorite 16 games for recognizing numbers then check this article out.

A tricky extension of this game is to try to order the numbers, e.g. start with zero, then one, then two etc…

Give one child a toy; everyone else holds the parachute. Shout a question, e.g. ‘How many legs does a cow have?’

Give the child a moment to answer. When they do, everyone lifts the parachute rapidly into the air making a mushroom. The child runs under the parachute and out of the other side. They give the toy to someone else, and then repeat the game.

Other questions could be things like – ‘How many eyes do we have?’ ‘How many fingers?’ ‘How many legs does a spider have?’

For this game, the parachute is placed flat on the floor. Two sets of number cards are lain in a single line around the whole outer edge of the parachute. The two sets of cards will be made of the numbers 0 to 5, or 0 to 10 (two sets of each).

The children walk in a circle around the parachute until the adult shouts a number, e.g. 6. At that moment everyone freezes. The two children that are standing next to a number six then have to run to swap places with each other.

Repeat with other numbers.

This one is certainly not rocket science, but this is one of the best ways of incorporating maths into parachute games. A great number song for parachutes is the five naughty monkeys jumping on the bed song.

Get five teddies and bounce them on the parachute whilst singing the following song:

At the end of each verse, remove one monkey from the parachute and count how many are left. Then repeat the song with that quantity.

This is one of the fantastic songs involved in my article 14 brilliant preschool songs using a parachute.

6. Count to a number and then release!

In this you pick a number that you will all let go on. It could be six, for example.

Then together you count up to that number, giving the parachute a little shake on each number as you count it.

Then when you get to six you allow the parachute into the air and let go! Again, if done properly and everyone lets it go, the parachute will hurtle upwards into the sky causing great hilarity and excitement.

This is brilliant for rote counting. To find out more about what this is, and the best ways to teach it, then take a look at this.

This can be quite tricky, but is good as an independent challenge for a small group of children.

Pick a simple 2D shape, for example a square or a triangle. Get the children to try to create his shape by folding the parachute on the floor. A lot of teamwork is required. It also needs problem solving skills, with a sprinkling of shape awareness.

Give every child a sticker to put on their top with a number on it. You will have matching pairs of numbers, so there will be two children with a three, two with a five etc.

Shout a number, and then everyone lifts the parachute into a mushroom. The two children who are that number have to swap places under the parachute. Repeat with different numbers.

Have some big 2D shapes and place them hidden under the parachute. Then say ‘1, 2, 3’ and everyone lifts the parachute into a mushroom. Shout a child’s name and a shape, e.g. ‘Billy. Triangle’. That child will try to get the shape and get out before the parachute falls. Continue with the different shapes.

This is basically the same as 2D shape dive, apart from you use 3D shapes. You could talk about their properties first.

To make it harder you could shout a number problem, and the child needs to find the answer. You could shout things like ‘How many legs does an insect have?’ ‘What is one less than five?’

You can use the concept of this game for teaching words and letters. To find out more phonics parachute games then take a look at the best 10.

This is a good game for tidying away the parachute at the end. It is best done with a small group of children.

Say to them that you’re going to try to fold the parachute until you can fold it no more. Fold it in half and say ‘One’. Then fold it again, and say ‘Two’. Continue folding and counting until it is impossible to fold it any more.

It’s good to use an egg timer for this game. Tell the children they have a time-limit to complete a task using the parachute.

It could be how many balls can they bounce off in the time. Or how many times can they make a ball do a circle around the parachute. Count as you go. Tiis is a good way to learn about the concept of time, as well as practising counting for a purpose.

Everyone closes their eyes.  Tap a few children on the shoulder, and they go and hide under the parachute. Then get everyone to open their eyes.

How many children are under the parachute?

Get everyone to have a guess and explain their estimation. Then get the children out and count them to check.

Did you know I have written an article called The 40 Greatest Parachute Games For Kids. This is the definitive guide to the ultimate parachute games, and if you have enjoyed this article then I would definitely recommend that.

Parachute games are one of the best ways of developing skills across all areas of the curriculum, and maths is no exception. Children can learn to recognise numbers, order them, and count in a range of different ways. They can explore 2D and 3D shapes, and other concepts such as estimating and problem solving.

All of these skills go hand in hand with boosting their social skills, confidence, and physical development, so all in all parachute games really are a winner.