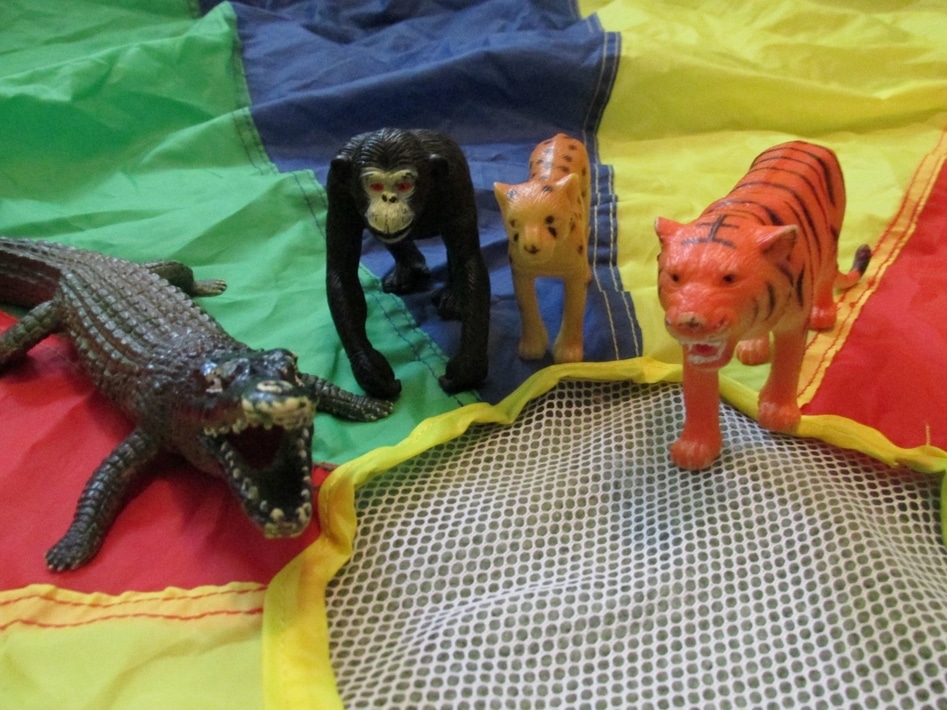 In ten years of teaching in the early years, I have always found parachute games one of the most exciting strategies for developing teamwork and cooperation. Many of the favourite games, and the ones that children often ask for again and again, are the animal games.

What sort of parachute animal games can you play? Here are my all-time favourite 15 games:

To find out how to play them, please keep reading!

Also, because of the popularity of these smaller parachute games articles I have written, I have now condensed all my favorite games into one massive post called the 40 greatest parachute games for kids.

This is really good fun. It is a bit like a revamped version of the classic game Duck, Duck, Goose.

The children then make the waves of the sea with the parachute, gently going up and down above the shark’s head.

The ‘shark’ will then ‘swim’ around in the sea, until they choose a child’s leg to tap. (Remind them to do it gently). That child will then run all the way around the parachute, back to where they started and then go under the parachute, swapping places with the shark. They are the new shark. Repeat.

Have a cuddly animal, e.g. a tiger, and bounce it gently on the parachute. There is a song that goes with this one. It goes to the music of What Shall We Do with the Drunken Sailor? But the words are:

Early in the morning

There are lots of things you can do with him, for example:

Early in the morning

You can also do some of the following:

Up and down, and up and down…

Repeat the game for different animals. This is one of my favorite games that I write about in my article about the best 14 parachute songs.

This is a great game that is easily adapted in lots of different ways.

Have some toy animals, cuddly toys or plastic ones are fine for this. Put them under the parachute.

Pick a child to go first. Then on the count of ‘1,2,3,Lift!’ Everyone lifts the parachute up so that it balloons into the air. Shout an animal, e.g. ‘Giraffe!’

The child that you have picked will run under the parachute, and rescue the giraffe and bring it out to safety. Repeat with different children and different animals.

Give each child a sticker with a picture of an animal on. There needs to be two of each animal (if you have an odd number you can have a three).

Again, you go ‘1,2,3, Lift!’ And everyone lifts the parachute up into a mushroom. Then shout out an animal name, for example ‘elephant’. The two elephants run under the parachute and change places. Repeat for different animals.

You can give the children the animal names verbally if you think you will remember them. Games like this are fantastic for developing memory skills.

There are so many fantastic animal songs that you can sing and bring to life with a parachute.

Down came the rain and washed the spider out. (Lower the parachute!)

Out came the sun and dried up all the rain. (Raise and lower)

So Incy Wincy Spider climbed up the spout again. (Raise it again)

Simple animal songs like Baa Baa Black Sheep are great for keeping a beat whilst singing by shaking the parachute to the beat.

Songs like The Grand Old Duke Of York are excellent for teaching positional words.

Put some skipping ropes onto the top of the parachute.

The children then cooperate to bounce the ‘worms’ up and down, but not too hard so they go flying off.

Very simple but fun, and great for physical development and teamwork.

Have lots of sponge balls on the top of the parachute. These are the bugs.

Most of the children will be holding the parachute, but have a few that are the ‘bug-catchers’, and are standing away from the parachute.

Get the children to try to bounce the bugs off the parachute. The bug-catchers will round up the balls and throw them back on and just keep the process going. After a while, change places, so some children who had been holding the parachute will be the bug catchers.

For this you need some skipping ropes and some small sponge balls. The ropes are the snakes and the balls are the snails.

This is a simple listening game. Choose a child to go first.

Then say, ‘1,2,3, Lift!’ And everyone lifts the parachute into a mushroom.

The adult shouts either ‘snake’ or ‘snail’. The child has to quickly go under the parachute, and grab either a snake or a snail and bring it out to safety. Repeat with different children.

To make it slightly harder you could shout a number of snakes or snails (maybe up to 3, as it’s not easy to carry more than that).

This is similar to Dive, but slightly harder.

Have some toy sea animals and put them under the parachute. Then pick one child to go first and be the shark.

The children hold the parachute at about waist height and ripple it up and down, making the waves of the sea.

Tell the child the name of a sea animal to find from under the water, e.g. octopus.

The shark must then stoop under the parachute waves, and crawl or wriggle to find the octopus, catch it, and then bring it back out to eat.

Repeat with different children and the other toys. This is great for teaching vocabulary and the names of animals.

A simple fun game of cooperation. Have the sea creatures from the Shark game. Put them on the parachute, and then get the children to ‘swim’ around the parachute. They can roll it, tilt it, bounce it gently – anything that helps to move them around the surface.

Great for cooperation and working together as a teamwork.

Animals of course move in such different ways, and you can evoke these movements through using a parachute.

Say things like ‘We are going to be a slow, squelchy snail.’

Help the children make slow movements with the parachute.

‘We are going to be a speedy cheetah!’ (Make rapid, quickfire movements)

Other good animals are things like elephants, eagles, monkeys, or a T-Rex! Let them come up with their own ideas, and see what happens.

For this game you need either laminated pictures or toy animals. You need matching pairs of pictures or toys (again if you have an odd number, you will need three lots of one of them).

Put the parachute on the floor and space out the pictures or toys all the way around the edge of the parachute, a bit like the numbers on a clockface.

Storytelling and parachutes go together really well. A parachute is fantastic for adding sound effects to any story. For example, an elephant stamping can be done with forceful up and down movements. Or a slithering snake can be mimicked by shaking or swishing from side to side.

To start with the adult makes up the story, but if the children can join in and add their own ideas then that is fantastic. It might take a few goes until you get to that point.

Simply make up a story about animals, and get the children to add movements and sound effects to the story.

For example, ‘One day there was a little ant scuttling through the jungle. He met a stamping elephant. The elephant had terrible news! The evil vultures were about to swoop down from the sky and peck the ants. You must come with me and find the wise hamster…’ (etc)

Just make it up! If the children get involved it will become even more random and bizarre, and that is totally fine.

For more information about the best storytelling strategies to try, why not take a look at this article all about story stones and the many ways of using them.

There are so many fantastic counting songs with animals. Great examples are 5 Little Ducks  or 5 Cheeky Monkeys Jumping on the Bed.

For this game, it is good if you have some toys to go with the song. It could be five cuddly ducks, or five monkeys.

Put them on the parachute, and either bounce or roll them as you sing the song. Then, at the end of the song, take one toy off and count how many you have left. Repeat the song again.

This is a game of predicting the future.

Have a few soft cuddly animals on the parachute. What you are about to do is bounce them off into the air.

First, though, predict! Which one will the last one to stay on the parachute. Everyone picks an animal, and then go for it! Bounce them off and see which is left at the end.

There are many other types of parachute games that children really enjoy and learn a lot of skills from. Some of the best are:

1. Parachute maths games – There are all sorts of number recognition, counting and ordering numbers games that you can play.

2. Parachute phonics games – These games are one of the best way to consolidate simple phonics skills in a fun and exciting way. Check out my favorites here.

3. PSED parachute games – This is probably the most important aspect about parachute games! Children learn to cooperate, interact with others positively and work as part of a team.

Most children really love animals, and these parachute animal games are a real winner. Many children will ask for them again and again.

So, what are you waiting for. Good luck in trying out these games.