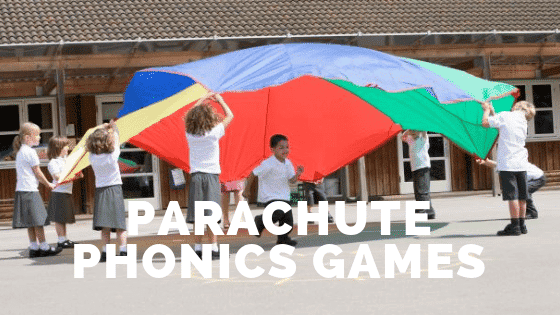 Parachutes are one of the most versatile and fun pieces of equipment to teach a range of skills in the early years. They are fantastic for maths, social skills and physical development. But what about phonics?

Though used less for phonics than other areas of the curriculum, parachute games are a brilliant way of bringing phonics to life.

They are great for really motivating children, and getting them engaged. A simple flashcards activity is really brought to a new level with the introduction of a parachute.

Parachute games can help teach many phonic skills. They are great for practising sounds, high-frequency words and other common words. They are also excellent for practising oral segmenting. Parachutes lend themselves really well to games that develop sight memory of words and sounds.

Because they also require movement, they are good for active sounding out of words and segmenting physically as well as orally.

It’s time to give parachute phonics games a try!

Based on the popularity of this article, I have subsequently written The 40 Greatest Parachute Games For Kids which you can read here.

Anyway, here are my favourite ten phonics games for parachutes…

This is a classic parachute game that is here adapted with a phonics emphasis.

Get the children to check they know what is written on their sticker to start with. It completely kills the game if they don’t know. Then, together, you all say, ‘1,2,3…’ and then lift the parachute high into the air.

As you lift it you shout a sound or word. For example, ‘p!’

The two children wearing ‘p’ stickers will then hopefully run under the parachute and swap places. Then you repeat the game again for a different sound or word.

This is a great game for letter recogntion, and also active games like are fantastic for developing early memory skills (check out my favorite 22 preschool memory games here).

2. All Change with a movement

This is a jazzed up version of the All Change game.

The only difference here is that you pick a way of moving under the parachute! For example, the children could hop underneath it. Or they could slither like snakes! Or crawl like babies.

You simply decide on the movement beforehand, and then play the game in the same way. You all say, ‘1, 2, 3…lift!’ And shout a sound or word, e.g. ‘to’. The two children wearing that word change places using the movement you decided upon together.

Repeat for different movements after everyone has had a go.

In this one you need some phonics flashcards. Again they could be sounds, words, or even short phrases – wherever you are up to. You need two copies of each sound, word or phrase, and enough for one flashcard for each child.

Put the parachute on the floor for this one. Then you put the flashcards on the ground around the parchute, so that they look like the numbers on a clockface.

Then you get the children to walk around the parachute in the same direction. When you shout ‘Change!’ the children will look at whatever flashcard they are next to.

Oral segmenting is one of the most important skills in early phonics. To read my in-depth article about  how to teach oral segmenting in 15 fantastic games, you can click here.

Segmenting is just the ability to chop words up into their component sounds. For example, ‘pig’ would become ‘p-i-g.’

Parachutes are fantastic for this. Get the children to hold the parachute around the edge, and then give them a word. For example, it could be ‘sock’. Then you quite simply shake the parachute three times, whilst going ‘s-o-ck.’ Then one more shake as you go ‘Sock!’

Repeat each word a few times, and try out lots of different words. A really fun, active way of teaching segmenting.

For a full description of what segmenting is and how to teach it, then check out this article.

This is a game of cooperation and teamwork.

You have a selection of different large flashcards, maybe about eight to ten for a normal biggish parachute. You also have a large ball to roll around the parachute.

The adult starts by saying a word or sound on one of the flashcards. The children must try to work together to roll the ball towards that flashcard, and get it touch it. When the ball makes contact, the adult can choose a child to say another one of the flashcard sounds or words.

Work together to roll the ball towards that one. When you make contact, repeat with different flashcards. A great game of precision and focus.

Ball games are fantastic for engagement and a range of skills! (You can take a look at 30 brilliant ball games here).

6. Balls with words on

For this game you need a selection of smaller balls – ideally sponge balls about the size of tennis balls. Write some words on the balls – either with a permanent marker, or you could put stickers on the balls if you didn’t want the words to be on there permanently.

Then you need two teams. There will be the bouncers and the catchers!

The bouncers stand around the parachute and hold onto its edge. The catchers stand away from the parachute, ready to try to get the balls when they come shooting off.

Show the children the balls and get them to say the words or sounds written on them. Then put all of the balls onto the parachute.

The bouncers try their best to bounce all of the balls off the parachute! The catchers have to try to retrieve the balls, read the word or sound on them, and then throw them back onto the parachute, where they will get bounced off again!

After a couple of minutes of playing this one, swap the two teams around so everyone gets a go of everything

This is another classic game, that I have adapted to include phonics.

This game is also great for teaching maths, and if you want to read my favourite 14 maths parachute games, then go here.

For this game, again you need some flashcards of words, sounds or phrases. Just one copy of each is required. You put these flashcards on the floor face up, and then put the parachute over the top of them.

Then pick a child to go first. Everyone counts together, ‘1,2,3, Lift!’ Lift the parachute so that it mushrooms high into the air.

Then shout a sound, word or phrase, e.g. ‘the’. The child must ‘dive’ under the parachute, grab the right flashcard off the floor, and then take it back to his place. He or she can put it on the ground behind them. You then repeat again with a different child and flashcard.

This is similar to Dive, but a bit more difficult!

Once again place a range of flashcards face up underneath the parachute. Have the children hold the parachute at about their waist height. Then they ripple the parachute up and down so that it looks like the waves on the sea.

Now it is time to pick the shark! Say a child’s name and then a flashcard for them to find. The ‘shark’ must dive down under the rippling sea and crawl or stoop to find the flashcard.

When they find it, they bring it out and put it on the floor behind them. Repeat with different children until you have found all the flashcards.

Interested in animal parachute games in particular? Then take a look at these 15 fantastic ideas.

In this one you need about four words (or sounds) on large flashcards.

You simply call out one of the words on the flashcards, and then the children try to see who is holding that flashcards. When they find it, they walk towards the flashcard and stand next to it. This is definitely a walk don’t run game!

When they get to the flashcard, call another one. The children have to work together to carry the parachute over to that flashcard. Repeat! A good one for cooperation and teamwork, like lots of the best parachute games.

This is a really fun game! Have some sponge-type balls with words or sounds written on them.

You simply hold up one ball at a time and get the children to read it.

When they have read it you throw it onto the parachute and children try to bounce it as high into the air and off the parachute as they can! Then simply repeat with different words on balls until they are all used up. One of the most fun ways of basically sight-reading flashcards.

You really must give some of these phonics parachute games a try! They are great for communication, teamwork and cooperation. They also reinforce phonic knowledge and skills in a really fun and dynamic way.

The importance of bringing fun to phonics can’t be overstated.

How to teach ‘tricky’ words – 12 games that work

← Do You Teach Blending Or Segmenting First? Teach counting back from a given number - 14 games →