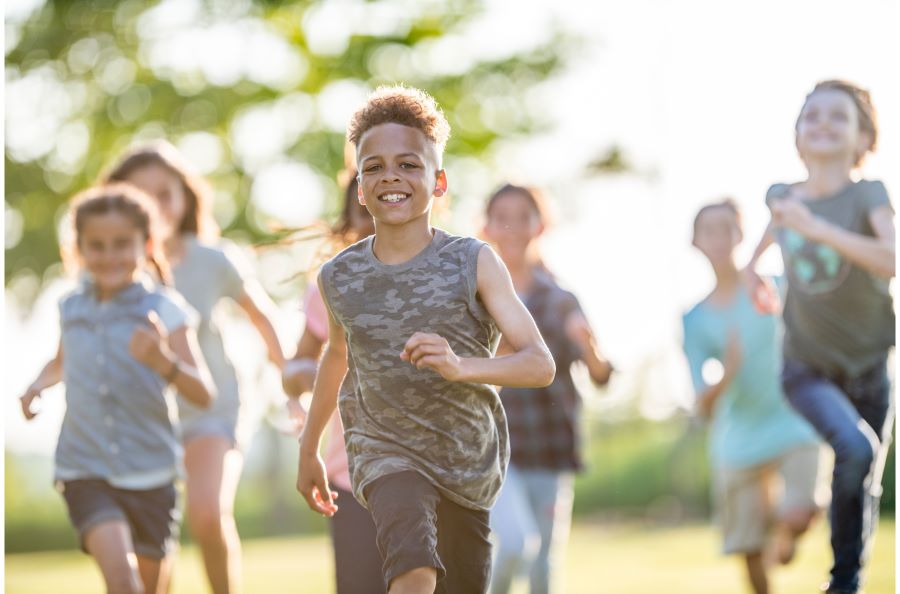 Kids love different fun relay races, but it can be such a hassle getting all the equipment ready!

Hoops, sacks, batons, bean bags…eek! Sometimes we just don’t have the time for all that. You just want relays that are simple, hassle-free, EQUIPMENT FREE, and…they work!

That’s where the following list comes in. I’ve taught kids aged 3-5 over the last 12 years, and I’ve put together the following ultimate list of 15 relay races that you can do with absolutely no equipment!

These races are great for kids of all ages (or at least from about 3 to 18)! They are great as:

So, let’s dive into the ideas…

Split everyone into teams, and these teams then separate into two and sit at either end of whatever track (or space) you have.

There are different ways of doing this one.

The easiest way is to pick one animal that everyone will run like. This could be:

A slightly harder version of the race is that for each leg of the relay, the kid will run like a specific animal.

So, for example, for the first leg, everyone runs like a horse. Then the second leg, every child has to run like a crab (and so on).

A harder version is to have a ‘caller’. This person will shout out the name of an animal at any random point in the race. Everyone will ‘transform’ into this animal at whatever point in the leg they are up to.

So, they might shout, ‘Elephant!’ Everyone stamps, with trunks and swinging ears.

This is pretty much as it sounds.

For the backward version, everyone has to run backwards! Encourage them to look over their shoulder in the direction they are traveling so they don’t fall over though (little safety tip for you there!).

For sideways, they can generally go a bit faster! (You just have to run sideways, of course).

You can mix things up, by doing a Forwards Backwards Sideways Relay.

Just have one person, either an adult or a child, that calls out how to run at different times.

So, for example, shout, ‘Backwards’. Everyone runs backwards, until the next instruction – for example, ‘sideways’.

This is another pretty simple concept!

Basically, everyone runs like a zombie in this race. You know the drill – arms stretched out, legs completely straight, ‘zombie’ face and moaning loudly is optional too.

You can make the race a bit more complex by having a ‘caller’.

This person has two possible instructions – ‘zombie’ and ‘human’.

When they call ‘human’, everyone at that moment runs like a normal human. When they call ‘zombie’ you’re back to being…yes, you’ve guessed it – a zombie

OK, technically this has some equipment in it – the kids’ shoes. But I’m kind of guessing they’d have these anyway, so I’m including it in this list.

All the kids take their shoes off to start with for this.

All the kids, at this point, have either bare feet or socks.

Everyone stands up. Ready, steady, go!

The first child in each team runs barefoot to their shoes, puts just one of their shoes on, and then runs back to their team.

Then the next person goes.

The second time they all run, they get their second shoe and run back.

The winners are the first team to be sitting down with their shoes on!

For this game you ideally need large teams, so I normally split the kids into two groups.

Both teams are going to stand in a long line, about five yards from each other. They will all be facing forwards to start with.

In the Mexican Wave version of this game, the first child spins around and waves. Then the next child does the same, and so on down the line till you get to the end.

You can do a race with just one leg – from one end of the line to the other. Or you can go up and down the line several times.

You can pass other kinds of moves down the line apart from just a wave.

This is the relay version of the classic ‘Twister’ game, with no mat or spinner required.

It is best done as a non-competitive race – just a fun, team-building experience.

Have a ‘caller’. They are going to shout what body parts need to be in contact with the ground for each leg of the race. So they might call out – two hands, one foot. Everyone runs like that!

Other ways they could run are:

You have a ‘caller’ in this race.

The teams line up at one end of the race track. This is basically like a normal relay race, other than at any time the caller is going to shout ‘Stop!’

When that happens, everyone sits down straight away on the ground.

They wait for them to shout, ‘Go!’ Then jump up and continue the race.

It’s all about speedy reactions this one, and this can definitely overpower just brute speed!

For this relay, the teams sit at one end of the track. One member of each team goes to sit at the other end. The one person by themselves sits so that they are facing away from their team, with their back to them.

When the race starts, the first member of each team runs to where their solitary team member is sitting, stops behind them, and shouts, ‘Who am I?’

The person with their back turned has to guess correctly before that team member can run back and the next person goes.

This is a real old classic of a race! Basically one child is going to be the ‘wheel-barrow.’ They lie down face-first. Another child picks up their legs, and the wheel-barrow pushes up with their arms.

The wheelbarrow will run forward using their arms, while the kid at the back pushes them along and keeps them up.

This only really works if you are in a natural environment, where you have free access to several different resources – like leaves, twigs, daisies, or whatever else.

Everyone splits into teams, and sit at the start line.

The idea of this game, is that the adult is going to call out what the kids have got to go and find at each stage of the race.

So, you might call out, ‘twig!’ The first runners in each team will run off, get a twig, and run back to their team.

Before the first comes back, call out what the next runner will collect, e.g. leaf.

They run off and get that.

The first team to collect all the challenge objects are the winners.

This is a non-competitive relay race. It is also a mindfulness experience, and helps the kids experience a sense of liberation.

Basically, the idea is to run while doing different noises! You could have a ‘caller’ who decides what noises everyone should do.

Some good ideas are:

Just mix up the different noises as you go.

I’ve also done a version of this where you the speed you run is linked to how loud a sound you make. Walk slowly, and make a little hum.

Run fast, and loudly yell. All the speeds in between, just vary your volume accordingly.

This is definitely a funny game, and a real team-builder.

Everyone splits into teams. One member of each team is going to sit alone at the end of the track, directly opposite their team.

They sit with their back to the others.

This is not a race – just a funny team game! The first member of each team will creep up to the member of their team sitting with their back turned, and try to scare them!

The usual method is going ‘Rahhh!’ in a terrifying way.

Then that person runs back to their team, and the next person goes and tries to do the same thing.

There are no real prizes for genuinely scaring your team member. It is just for fun!

Note – some children are genuinely quite traumatized by loud noises, so try to avoid these children being the ones that are the ones that will be ‘scared’. Choose someone that thinks it will be fun (and hopefully they will volunteer anyway).

There’s a nice simple idea behind this one.

Basically, the kids have to run like ‘crabs’. That is, on all fours, but with your belly facing up at the sky.

They can run sideways, forwards, or backwards in this position – it’s hard to know which is the quickest!

This is an extension of the crabs race above (obviously!).

Crabs – as described before, are on all fours with your belly facing the sky.

Monkeys are also on all fours, but with your bellies facing the floor. Generally, the monkeys will run much faster than the crabs!

There are different ways of playing the race.

One way is to alternate legs, so the first leg is run like  a monkey, second like a crab, third like a monkey, and so on.

The other way is to have some kind of ‘caller’. They shout either ‘crab’ or ‘monkey’ at different points throughout the race!

Everyone has to transform into the different animal that has been called. This is definitely the funniest way of playing the game.

This invisible ball game is a classic circle game and works really well as a relay race.

The idea, as you can probably guess, is that each team takes possession of an ‘invisible ball’. (It’s just pretend!)

They must keep control of this throughout the race.

You can play any of the following games:

Everyone should have a bank of no equipment activities up their sleeve, and these relay races are simple, quick to arrange, and most importantly…they work!

If you’ve found this helpful, you’ll also enjoy my post about the very best ball games for kindergarten age children.

← Toddler Watching TV Upside Down? This Is Why 17 Fantastic Parachute Games For Middle School →