Containment Schema – What It Is & How To Support It 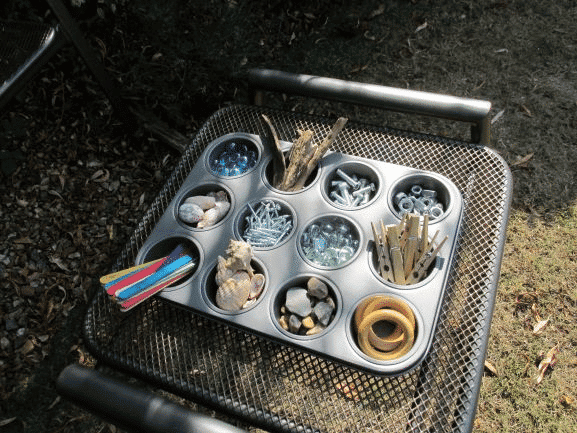 Do you have a child that spends hours putting things in pots?

Or do you have one that loves climbing into any available box and hiding in there?

More than likely these children are demonstrating a containment schema.

Simply put, a containment schema is when a child is interested in putting objects into containers. They may enjoy both objects and themselves being placed inside other things.

It is very similar to the more commonly known enveloping schemas or enclosing schemas. (Source)

In this post, I will look at exactly what a containment schema is, outline why you might want to support it and describe lots of activities that help allow this schema to flourish positively.

What Is A Schema?

A schema is when a child demonstrates a repeated pattern of behavior.

Schemas were first developed as a theory in around 1920, and have been a part of child development understanding ever since. (Source)

Children construct models in their minds. Schemas are a way of them testing these models on reality.

For example, a child that enjoys lying on their back or looking at things through their legs may well be demonstrating an orientation schema.

Likewise, a child that is interested in repeatedly moving objects around the space in a variety of ways may well be demonstrating a transporting schema.

Schemas give us an insight into how children think, and how they view the world.

There are many known schemas, but most commonly talked about are the following nine (of which, admittedly, containment is not one):

What Is A Containment Schema?

Children who demonstrate a containment schema are interested in placing objects inside other objects.

They may well also be interested in hiding inside objects (such as boxes or cupboards) themselves.

They are learning about the properties of objects, ordering reality, and how things work in relation to other things.

For example, they love to place objects in pots and pans.

They enjoy hiding in dens or boxes.

They are interested in filling up buckets with sand or water.

Why Should We Support Schemas?

By supporting schemas, we can help children learn at an accelerated rate.

By first identifying schemas, and then supporting them, we are working alongside the forces of nature in action. When involved in schema play, children are more focused and access a deeper level of learning.

Schemas particularly help with the following:

15 Activities To Support A Containment Schema

Here are some activities that help to support containment schema play:

Pretty much all kids love playing with large boxes in different ways, and those with containment schemers really enjoy climbing into them.

To support this, you can provide torches or blankets for them to use inside the boxes. Also, a range of different sized boxes can add to the level of curiosity.

Hammocks can be used in a variety of ways by children with a containment schema. They can:

Hammocks can be suspended between trees, or even between fences or posts.

This is a great fine motor game, that taps into this interest for placing objects inside other objects.

You need some kind of box for this. You want to decorate the box to look like something that likes to eat a lot!

It could be an alien, a shark, a tiger, or anything else like that.

Here is an alien box that I made:

You can see that I cut a hole out for the alien’s mouth.

Now the kids are going to ‘feed the alien’. they can feed it with anything that will fit in the hole, such as pasta, dried beans, or even little bowls of playdough.

If you want, you can do it as a timed game, as you can see in the picture. Race against the clock! How many pieces of food can you put in the alien’s mouth?

This game works equally well, however, as simply a child-led game with no timer or level of competition.

Worry monsters are a beautiful resource for circle times. They aim to help children deal with anxiety and worry.

Create a box that is decorated like a monster, and cut a hole out for the monster’s mouth. It will look something like this:

Set the children in a circle and give out one pebble to each child. One at a time, a child holds the worry monster and describes something they are worried about. They place the pebble into the monster’s mouth, before passing the monster to the next child.

You can read my full selection of 15 worry monster activities here.

Any kind of crawl nets, tubes, or other contained soft play equipment, are fantastic for children with containment schemas.

6. A Variety Of Containers In Sand and Water

This is one of the most common ways you will see a containment schema in action.

It makes sense to provide a wide range of differently sized containers for both sand and water. These can include:

This is one of my favorite ways to introduce loose parts and is also perfect for a containment schema.

Have a selection of small loose parts in a tinker tray for the children to use. It will look something like this:

Have a picture frame for each child. Old photo frames are great for this, but you can also create frames using sticks joined together.

The children use the loose parts to create transient art in the picture frames. The framing helps to psychologically contain the art for children demonstrating this schema.

Dens are a fantastic space for children to go to feel that sense of being contained.

Have a range of equipment for children to use to create dens, such as:

Have a variety of bags that you can transport around your learning space.

Some bags you can have include:

Children can transport all kinds of things around the space using these bags.

A lot of children will do this anyway. They paint a picture and put a circle or border around it.

You can do this in an adult-led context, by creating boundaries to artworks that you create. You could:

11. Range of Resources in Small World

Having a range of loose parts available in small world play will often stimulate quite a lot of containment schema play.

Children with this schema like to create zones, buildings, and containers.

For example, they might build a ‘hole’ out of popsicle sticks in which they then place a toy figure.

Children stick glue around the outside of a piece of paper and stick natural items that they find there to make a frame. It will look something like this:

They can then use these frames to create transient art.

Pretty much all children enjoy the concept of treasure, and it works really well for a containment schema.

Some opportunities to bury treasure include:

Any kind of shape sorting game you can find works well for children with containment schemas.

It could be placing different 3D shapes through outlines or even simple shape puzzles such as jigsaws.

This is a fantastic fine motor activity as well as being great for a containment schema.

Have some kind of small objects such as:

Use tweezers or chopsticks to pick up the small objects, and place them into any of the following:

-Provide plenty of containers both indoors and outdoors

-Provide plenty of different small objects that will fit in containers, and lots of tools to aid in getting them in, such as tweezers and tongs

-Support the schema in both adult-led and child-led experiences

← How Many Play Schemas Are There? (Solved!) 22 Mandala Activities (Art & Play Ideas) →