Are Worry Dolls Bad Luck? (8 Reasons Why They’re Not) 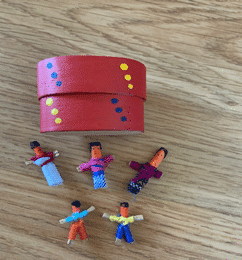 There seem to be a few rumors online that worry dolls are linked to voodoo, or are connected to bad luck, or a few other things like that. So, I thought I would set the record straight!

Worry dolls are a positive resource that originated in South America, and have subsequently become used around the world. They are not linked in any way to voodoo, or bad luck, but are a resource to alleviate anxiety and worry in children.

I have used worry dolls in all sorts of ways, and they have a fantastic impact on the children that use them.

For those that are unsure what they are, worry dolls are small figures. The classic way of using them, is that a child tells their worry to one of these dolls before they go to sleep, and put the doll under their pillow.

In the morning, the worry is hopefully gone.

For any child that has issues with anxiety, worry dolls are a great way of helping them manage their feelings.

I am going to take a look at 8 positive reasons that categorically demonstrate that worry dolls are not anything to do with bad luck.

1. Worry Dolls Grew Out Of A Positive Story

The origins of worry dolls is a grew out of a Mayan legend.

According to commonhope.org, worry dolls originated from a legend of a Mayan princess named Ixmucane. (Source)

This princess received a gift from the sun god. This gift allowed her to solve any problems that other humans could worry about.

All worry dolls since then have represented this goddess, and are symbolically imbued with her gift – to solve worries.

There is no mention of black magic, or voodoo, or anything similar. Just a positive legend of a figure with a beautiful gift.

2. Worry Dolls Are Linked To Psychoanalysis

Worry dolls work in the same kind of way as psychoanalysis.

In psychotherapy you talk through your problems. This helps you understand them better, and also to process all associated issues.

There has been research carried out that links the positive effects of talking therapy with emotional disturbance. (Source)

I have taught young children for the last 12 years, and in that time we have used worry dolls in all sorts of ways – in circle times, group times, for art activities (and many more).

The over-riding benefit of these activities is that they get children talking.

They tell their worries to the worry doll in a way that they often can’t to another human. This helps them to process and manage their concerns.

One of the things that worry dolls help with is getting children to make sense of their feelings.

Often children’s worries and fears are irrational. For example, they might think there is

4. No Evidence Of Voodoo Or Similar

I have scoured several authoritative websites and texts, and I have found no evidence that worry dolls are linked to voodoo or any similar black magic.

I think they are more strongly linked to other dolls that are used in many cultures.

For example, children may play with a teddy or take it to bed.

They may have dolls, or cuddly toys.

This is more the way to think of worry dolls – not as voodoo, but as a toy with an emotional significance.

My favorite way of using worry dolls in an educational setting, is to have them as the focus of a circle game.

Sit the children in a circle, and introduce the worry doll.

The one I use the most regularly in circle games is the large stick worry doll.

There are different games you can play, but the simplest one is to pass around the stick, and all tell it one worry. Say something that is bothering you to the stick whilst you hold it, and then pass it on to the person next to you.

This is a bit like group therapy for children.

There are other variations of this idea that you can do.

For another game you all need a little mini worry doll. Give them out so each child is holding one.

Have some kind of basket or box. Pass the basket round, and one at a time, the children say a worry and place the doll into the basket.

Older children could draw a worry, or even write it down, and give it to the worry doll.

It is good to refer back to some of the worries at a later date, and see if the children are still concerned about the same things. Sometimes they will be, but often the worries will have been and gone.

Worry dolls help children to focus their worries on something external to themselves.

This is really beneficial.

It is good for us all to get things out of our heads, and into the world. The worry dolls really help this process, and make ideas into a more concrete form.

7. They Come In Many Forms

Worry dolls don’t just have to be mini figures that you buy in a shop.

There are all sorts of ways of making them.

A worry doll could be a popsicle stick, with two eyes drawn onto it.

It could be a long stick from outside, with some wool twisted round it.

Most of the time when I have used worry dolls with children, I have got them to make them themselves. This really adds to the sense of ownership.

Children always respect a resource more if they have made it themselves.

Here are some great ways of making your own worry dolls:

They are great for imagination, as well as being a beautiful source of fine motor skills with a purpose.

8. They Link Imagination To Our Emotions

Our imagination is strongly linked to our emotions.

That is why people can be so strongly moved by a film, or a book, or a play.

Even though you know it is not real, you still react powerfully to the characters and the situations they find themselves in.

Art and the imagination can stir the most powerful emotions in all of us. And so it makes sense that worry dolls use that sense of make believe and imagination to impact positively on children’s emotions.

Without that mystique, and the element of wonder, worry dolls just would not work!

That does not mean that this element of awe and wonder is in any way misleading or negative. It definitely is not!

It is hard to too strongly put forward the case of the importance and therapeutic benefits of worry dolls.

They have absolutely nothing to do with voodoo or witchcraft, or bad luck in any way!

They are closer in concept to a teddy bear, or a simple doll. Children will get emotionally attached to them in a similar way, and this is one of the sources of their power.

Also they contain that spark of mystique and excitement, that is great for tapping into emotions.

Good luck if you try using worry dolls, either in preschool, school, or at home.