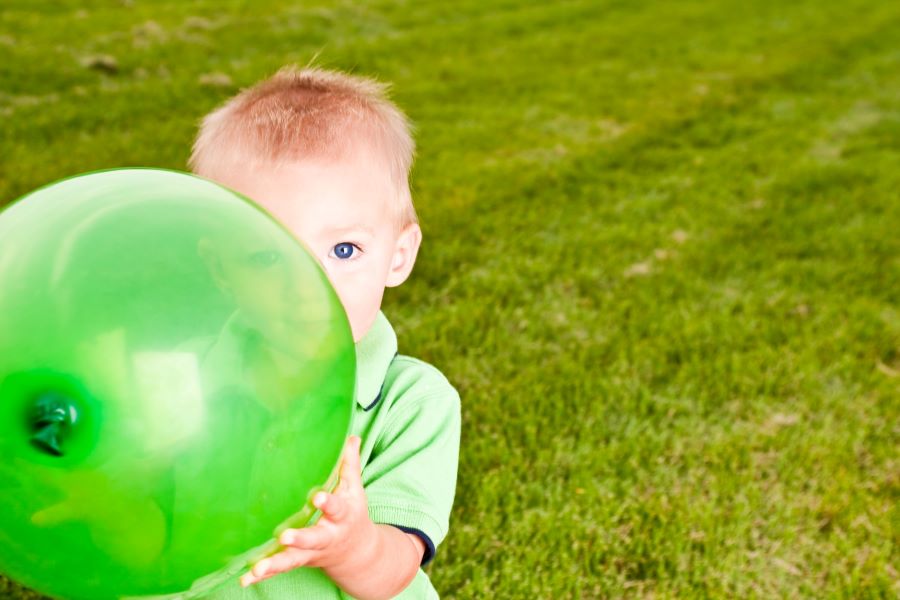 They are slow-moving and floaty, and so really suited to help them develop their coordination. Also, they are soft and springy, and so are probably the safest items that you can throw and whack around!

There has been research that suggests that balloons have the following benefits:

A quick safety note – balloon play should be supervised, as deflated balloons are a choking risk for children under the age of 8.

In this post, I’ll look at the ultimate 15 balloon games for toddlers.

Balloons are often seen as an indoor activity (and that makes a lot of sense).

But often a young child will find a balloon fascinating when it is moving as if by itself!

You can’t really use balloons on super-gusty days, as they blow into the distance never to be seen again. But on those days with just a light breeze blowing, children can find amazing excitement in following a balloon around as it scuttles along the floor, or billows into the air.

They are learning about simple coordination and spatial awareness.

2.Hit Balloon And Say ‘Thank You’

This is one of my favorite games to teach good manners and how to say ‘thank you’.

This can be played with one adult and a child, or with a bigger group of kids.

The adult says the name of a child and pats the ball towards them. That child tries to grab the balloon (or pick it up), and say ‘thank you.’ Then they throw it back, either to the adult or to another child.

This game is also great for learning names and eye contact.

This takes a bit of preparation this one! But it is extremely exciting.

You need some kind of suspended net – something like a soccer goal net – and some way of suspending it near the ceiling.

Then fill it with balloons. Have the toddlers stand underneath!

Some kind of exciting build-up is the way to go! And then let the balloons fall down over the heads of the kids. They love whacking them, and generally frolicking in them.

4. Carry Balloon On A Plate

This is a balancing and coordination game. You simply get a paper plate and try to put a balloon on it. Can you walk around with the balloon balanced on the plate?

This is a simple and natural activity, that many toddlers will try out.

The child throws the balloon up (either into the air or in front of them). Watch as it floats down to the ground.

Then pick it up and have another go.

Using balloons like this is probably the safest and simplest way to teach early throwing skills.

This is a great activity for a party situation and is very liberating.

The concept is very simple! Just have a load of balloons, and either a child or a group of kids go around whacking them.

They can hit them in the air or from the floor.

This is probably the simplest way to introduce throwing and catching.

It’s probably best as an adult-to-child game. Sit kneeling and face the child. And simply throw to them. Toddlers usually let the balloon bounce off them, then pick it up.

Rolling it, or patting it forward along the ground is easier than hitting.

8.Putting In A Basket

Many children love putting objects into a container. This is especially true for children with an enclosing or enveloping schema.

Have some balloons for the children to access and some kind of big container like a large wicker basket. Many will enjoy picking up balloons, placing them in the basket.

And the best bit is emptying them out again at the end and starting again!

Most toddlers will need a bit of help with this, but they find it really fascinating.

You probably know the trick – rub a balloon on your hair for quite a few seconds, and then the static electricity helps it to stick to the wall.

10.Pass Balloon Around A Circle

This is a group circle game. It is a simple passing game.

Sit in a circle, and try to pass around a balloon! It’s as simple as that.

This is a similar idea to the above game, but in this version, you have some music as well.

This game is a bit like pass the parcel. The balloon is the ‘hot potato’.

Sit in a circle, and put some music on. When the music starts, the toddlers start passing the balloon around (with support if necessary).

Whenever the music stops, that person is the winner! Everyone gives them a clap.

Then start the music and the game again.

12. Balloons On A String

Of course, this is an absolute classic.

These are good to use either indoors or outside (as long as it’s not too windy).

When children run around, they act a bit like a kite.

They can also drag them along the floor, and I once saw a child pretending one was a dog on a leash.

13. Balloons On A Stretchy String

If you use something like a rubber band for the balloon’s string, then you create something a bit like a yo-yo.

Toddlers can run around with these, or bounce them up and down.

This is a bit of a trickier game, and only really for children close to the age of three.

It is easiest to play as a pairs game.

Basically, one player tries to hit the balloon to the other. That one hits it back.

At this young age, the kids will often be hitting the balloons along the floor at each other.

This is a beautiful experience of freedom and liberation.

Children love to lie in a ball-pall of balloons. They can propel the balloons with their arms and legs, and make ‘snow angels’ in the balloons.

Using balloons has lots of benefits for young children. Because they move so slowly, they have a greater reaction time as opposed to using balls.

They offer a great way of teaching: